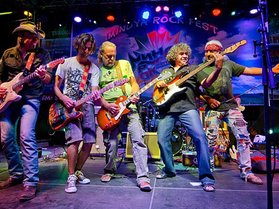 At the insistence of the hardcore fans, the second night of this year’s Mindya Rock Fest on 29 August will feature heavy metal bands like “Horizont”, „ Impade ”, „ Casper ”, „Nemo band” and „ Monolith ”, shared Political Sciences professor Evgeniy Dainov, one of the fest organizers.

The Fest in Mindya, not far from Veliko Tarnovo, takes place from 28 to 30 August at the central village square of the village. The first night of the fest features five young bands, which will have to impress the audience and the jury in order to win the prize – free of charge recording session in a professional studio. Headliners of the first night are the last year’s winners of the prize – “Powerslave” from Veliko Tarnovo.

Among the participating bands is “Restart” – a band consisting of professors from the Faculty of Philosophy of Sofia University. The last night of the Fest on 30 August will be opened by Evgeniy Dainov’s “Magistri” and later on features “Atlas” from Turkey, “Cotton Pickers” from Serbia and the headliners Vasko (The Patch) Krapkata and Poduene Blues Band.