75 caricatures in “EvroSapiens – an Exhibition with History” 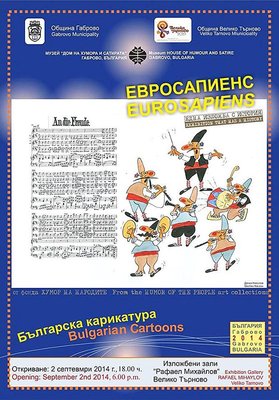 “EvroSapiens – an Exhibition with History” will be opened on 2 September at 18:00 in Rafael Mihailov Exhibition Centre.

“EvroSapiens” was born in 2009 from the eponymous National Caricature Competition project, supported by the then European MP Nikolay Mladenov (later Bulgarian Minister of Foreign Affairs). The exhibition was opened simultaneously in Gabrovo and Brussels on 1 April. The exhibition in Veliko Tarnovo features 75 caricatures by 24 prominent Bulgarian caricature artists. The works have their own artistic appeal and their biting irony and ruthless sarcasm urge the viewers to rethink certain long lasting concepts.

The exhibition also reaffirms the support of Gabrovo Municipality for Veliko Tarnovo 2019 bid.